The College of Veterinary Medicine is home to the most recognized sculpture and most visited works of ISU's renowned "sculptor in residence," Christian Petersen. Since their completion more than 60 years ago, The Gentle Doctor and The Veterinary Medicine Mural (bas relief) have been recognized throughout the U.S. and the world as symbols of veterinary medicine.

The Gentle Doctor sculpture, as described by Dr. Frank K. Ramsey: "The Gentle Doctor... reflects concern, affection, love, and the significance of life for all of God's creatures - great and small."

The statue was created in heroic, larger-than-life proportions -- it is seven feet tall. But there is a reason why Petersen incorporated large hands and feet. He understood that veterinarians stand on their feet all day, so the feet have to be big and strong. And as for the hands -- hands are the veterinarian's most important examining tools.

The tall, capable doctor gently holds an injured or ailing puppy while glancing down to catch the watchful gaze of the mother dog. The mother dog leans against the gentle doctor's knee, patiently waiting at his feet.

On both the original and the bronze versions of The Gentle Doctor, the puppy noses have been worn smooth by thousands of persons who instinctively reach out to bestow a reassuring touch. Christian Petersen’s sculpture evokes our human compassion for all animals, particularly our companion animals.

The idea of The Gentle Doctor began in 1936 when Christian Petersen was sketching a central figure to enhance the bas relief mural he was creating for the courtyard wall of the Veterinary Quadrangle. Some have speculated that the statue became a way to memorialize the dean of Veterinary Medicine, Charles H. Stange (*note on Stange, below), who had died suddenly of a heart attack in April 1936.

Beginning in 1938, the sculptor's studio was moved to an empty equine ward in the southwest corner of the veterinary quadrangle. It was here that a special rapport developed between the artist and veterinary students and faculty. Several students served as models for various stages of the sculptor's work.

Perhaps it was pre-ordained that aspiring veterinarians would be linked to the Danish-born sculptor. In 1936, while Petersen's studio was in the home economics building, he met a freshman pre-vet student who was earning his way through school by doing janitorial work. The student, L. M. Forland, would go on to graduate in veterinary medicine in 1941, but first he assisted Petersen as a model for what became known worldwide as The Gentle Doctor.

"It was the latter part of '36 and the early part of winter quarter '37 that I modeled for Christian Petersen... Mr. Petersen often worked in the late afternoons and evenings when I was there, and we became good friends....I remember too well how heavy his garbage cans were!

...If we had a few minutes' time, he would ask me to stand for him while he carved away at a small pile of clay. He had me hold a small pillow between my forearms in a position similar to that of a little pup."

That pillow or 'little pup' became the focal point of Petersen's statue. It represents the bond between people and animals, symbolizing the essence of veterinary medical practice.

The original terra cotta statue, The Gentle Doctor, was installed in 1938. For nearly four decades it remained outdoors in front of the Veterinary Medicine Mural. In 1976 the College of Veterinary Medicine moved out of the veterinary quadrangle and into a new complex at the south edge of campus.

As a gift to the College, Dr. and Mrs. John E. Salsbury had a replica of The Gentle Doctor cast in bronze for placement as the focal point on the entrance plaza for the College. The original terra cotta statue was refurbished and placed in a more protected setting inside the Scheman Building at the Iowa State Center before being moved to the lobby of the Hixson-Lied Small Animal Hospital in 2012.

*Charles Stange had become dean of the Division of Veterinary Medicine in 1909 at the age of 28. He was a pioneer in developing education for a new kind of graduate in veterinary medicine. He emphasized science and a rapidly emerging technology that applied to both human and veterinary medicine. This educational philosophy was impressed upon Christian Petersen, whose works reflected that message, emphasizing the symbiotic relations between humans and animals.

The Gentle Doctor replica is on the plaza to the main entrance to the College of Veterinary Medicine. 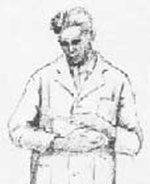 One of Christian Petersen's conceptual sketches

Hands are the veterinarian's most important examining tools 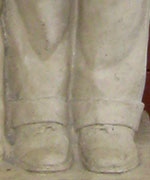 Veterinarians stand on their feet all day 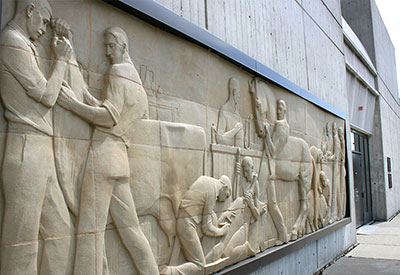 Iowa State's Veterinary Quadrangle building was constructed in 1912. For many years it was the most modern facility of its kind in the U.S., but it didn't receive its finishing touches until late in the 1930s. Danish-American sculptor Christian Petersen arrived at Iowa State in 1934. In 1935 he met with Dean Charles Stange to discuss a bold work of art for placement in the Veterinary Quadrangle's unfinished courtyard.

Together they developed the idea of a plaque to depict the services the veterinary profession performs in conserving the life and health of domestic animals, thereby safeguarding the health of humans. Dean Stange envisioned a bas relief mounted in a huge wall of the courtyard so that students and faculty would see the mural every day and be reminded of the professional achievements and goals of their curriculum in veterinary medicine.

Petersen was aided by his wife, Charlotte, whose research abilities and enthusiasm helped him develop ideas for the artistic symbolism of research and development milestones in veterinary medicine. In the mural's images, he portrayed major research advances, such as vaccines that protect humans and animals from contagious diseases.

Charlotte Petersen typed a report for her husband to describe the Veterinary Medicine Mural as it was being proposed. This description is excerpted from Christian Petersen Remembered by Patricia L. Bliss, and starts with the left section of the mural.

In 1894, at the age of nine, Christian Petersen and his family immigrated from Dybbol, Denmark to the United States. They lived for a few years on a farm in Illinois, then near the New Jersey coast. Christian loved working with the farm animals and spent his spare time sketching big draft horses and sleek, gentle cows.

He initially pursued a career as a jewelry die cutter. In 1934 he was recruited by famed Iowa painter Grant Wood. He joined the federal Works of Art Project directed by Grant Wood at the University of Iowa in Iowa City. The workshop there was housed in a converted swimming pool where Petersen began his first project for Iowa State College -- the bas relief sculptures for the Dairy Industry courtyard.

He was 49 years old when he came to Ames as the temporary artist-in-residence for Iowa State College. That was in 1934, with Raymond M. Hughes as Iowa State's president and a strong proponent of the arts and humanities. Petersen remained at Iowa State for 27 years, until his death in 1961.

An equine ward in the veterinary quadrangle was converted to a studio for Petersen in 1938 and it continued to be his studio for the remainder of his career and his life. With its outside door, it was accessible to townspeople who, along with students and faculty in the College of Veterinary Medicine, enjoyed stopping by for a chat. Petersen developed a special kinship with veterinary students. He found veterinarians to be intelligent, practical people who worked with their hands and hearts -- just as he did as a sculptor.

All of Christen Petersen's best works were created in Iowa. Thirty-three of his works can be seen today on the Iowa State University campus. Ten other notable Petersen sculptures are located in churches and schools in Ames and nearby Gilbert. Other major commissioned sculptures and studio pieces are publicly accessible in Iowa cities that include Cedar Rapids, Dubuque, Marshalltown, Des Moines, Mason City, and Dyersville. 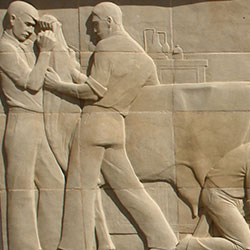 The protection of animal health by inspection of cattle for diseases, including foot and mouth disease, and development of vaccines. 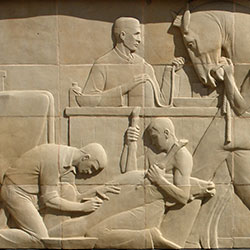 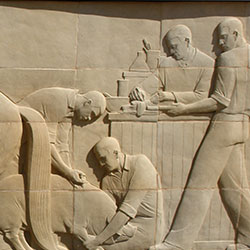 Created in conjunction with the opening of the Lloyd Veterinary Medical Center in the College of Veterinary Medicine, this art collection features three different collections. Each was commissioned by the University Museums Iowa Art in State Buildings Project.

Sticks Collection
The Sticks Collection is located in the patient/client waiting areas of the Hixson-Lied Small Animal Hospital. Each piece is handcrafted within Sticks' award-winning studio in Des Moines. Principal artist Sarah Grant (honorary alumnus 2009) created the works No devotion more true, no affection more heartfelt and We love them simply because they love us back reflect the bond and devotion between pets and humans. The stand-alone pieces are burned and painted wood that are located on either side of the entry ways to the hospital. The remaining nine pieces in the Sticks Collection, What Animals Do for Us, remind individuals again of the distinctive bond that occurs between animals and their owners.

Murrill Collection
Three bronze sculpture pieces are included in the Murrill Collection and are located outside the entrance to the Hixson-Lied Small Animal Hospital. Created by artist Gwynn Murrill, the pieces include Midnight and Varna, a depiction of two dogs playing outside, Running Saluki and Circle Cat.

Mahady Collection​
Located primarily in the glass hallway, which connects the Hixson-Lied Small Animal Hospital with the Large Animal Hospital, this artwork was created by Michaela Mahady and appears on the glass adorning the hallway. The Healing Tree Mural Cycle is a sand blasted glass mural that includes This History of Veterinary Medicine, Equestrian Plain and The Healing Tree. Another piece by Mahady, First Visit, is a sand blasted glass mural located in The Commons within the College of Veterinary Medicine. 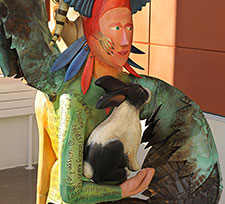 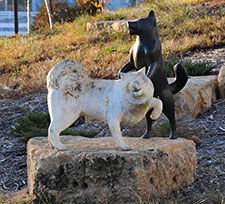 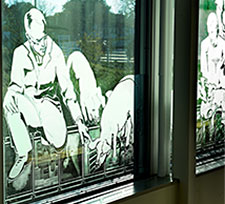 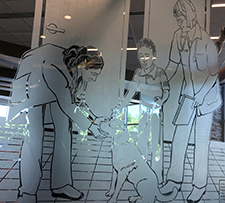